The Halton Stadium is a modern all-seater stadium built on the site of the former Naughton Park on Lowerhouse Lane.

Designed and built to provide far more than a world class arena for sporting events, the Stadium also provides function and banqueting facilities for the residential area and outstanding hi-tech conference facilities for business communities of Halton and beyond.

It was agreed that Halton Council in partnership with the Widnes Vikings would build a new stadium on the existing site. This stadium would provide a multi-purpose complex including a social club, conference facilities, recreational facilities and catering/function facilities. This would be the new home venue for Widnes Vikings. The stadium was officially opened on 2 November 1997 following the completion of phase 1 of a multi-million pound redevelopment of the old Naughton Park site.

On 29 January 1999 Halton Borough Council took over responsibility for the entire Stadium, both financially and managerially. This was necessary as the joint venture companies arrangements were not performing as expected.

The Stadium reached completion with the opening of the East Stand in September 2005. The Stobart Stadium Halton is an all-seater Stadium which has a capacity of 13,393. It has also had the honour to have staged national finals and international fixtures.

This additional stand not only increased the capacity of the Stadium, it also provided a table tennis centre of excellence to Regional standard, a health and fitness facility, a créche and a state of the art injury clinic. 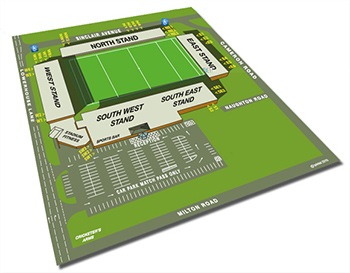 
This page is intended to be viewed online and may not be printed.